Shakespeare 400 has kept myself and many Irish Shakespeareans busy these past ten months. With many stage productions, screenings, conferences, public lectures, festivals, and workshops to organise, participate in, and attend, both here and abroad, these wonderful events can seem like a burden and the associated demands on one’s personal finances, time etc. present a substantial challenge. (If Shakespeare is sat merrily in a pantheon of literary gods somewhere, I hope he appreciates all the fuss! And while I’m at it, I hope that Jonson, Beaumont, and Cervantes, who have their own anniversaries this year, are giving him a right ribbing!)

Thus, it was a joy to find that the recent launch of the Centre for Early Modern Studies, Limerick, offered an array of pleasures for the weary early modernist. The launch took place on one of October’s prettiest autumn evenings in the inviting surrounds of the Glucksman Library’s Reading Room. Against the backdrop of the green surrounds of the University of Limerick campus, the audience were warmly welcomed by Dr. Richard Kirwan, the chair of CEMS, and his colleagues. Dr. Kirwan paid tribute to the Irish Research Council for their support of CEMS (via a New Foundations grant) and to his scholarly and administrative collaborators across the disciplines in Mary Immaculate and UL who were instrumental in establishing the new Centre.

The importance and value of collaboration and networking seemed to be something of a theme for the evening, as Prof. Jane Ohlmeyer (TCD) touched on this subject many times during her lecture on “Ireland in the Early Modern World”. The author of several influential monographs, including Making Ireland English: The Irish Aristocracy in the Seventeenth Century (2012) and Ireland from Independence to Occupation, 1641-1660 (2002), Prof. Ohlmeyer presented the audience with many insights into the seventeenth century and into her approaches to and aspirations for early modern research in Ireland.

Prof. Ohlmeyer, who has been recently appointed as Chair of the Irish Research Council, highlighted how collaboration can enrich our studies, enabling us to broaden our knowledge and share it with a national and global community. The lecture and post-Q&A discussions reminded me too of the value of encouragement to and role models for emerging scholars; sometimes only senior scholars can take on new initiatives and create opportunities in our fields and the importance of their leading by example cannot be underestimated. Prof. Ohlmeyer continued to urge the audience to apply for funding for research projects and to take advantage of the excellent resources which Irish research has already produced. Should we need inspiration, the fruits of such successful bids were in evidence before us – the foundation of the Centre for Early Modern Studies, Limerick and the digitisation of the 1641 Depositions (a project funded by the IRC, AHRC, and TCD), which Prof. Ohlmeyer discussed during her talk. Prof. Ohlmeyer stressed too the significance of the Bolton Collection; not only do its treasures make Limerick a desirable place to conduct research on the sixteenth and seventeenth centuries, the Collection can help us to reconstruct and understand Ireland’s place in the early modern world.

Prof. Ohlmeyer’s wide-ranging, illustrated talk on the position of early modern Ireland and its global connections combined a ‘big picture’ approach with fascinating detail. The audience learned of the exotic items found in a washpit in Rathfarnham Castle in 2014. This treasure trove of objects, including shoes, buttons, jewellery, and jars of cosmetics, demonstrated that the Loftus family were fashion conscious and on top of the latest trends. The Castle’s inhabitants were also consumers of luxuries from far flung lands; the pit contained evidence of tea, coffee, and sugar from the West Indies, and dozens of pipes were found, the tobacco likely sourced from South America. A Spanish coin made of silver mined in Peru was also found in the pit.

Prof. Ohlmeyer discussed Ireland’s maritime connections, including pineapples arriving in to Ireland in the 1660s and the voyages of Irish sailors to Asia and the Americas. Questioning what did it mean to be ‘Irish’ in the seventeenth century, Prof. Ohlmeyer examined the complex identities of social groups such as Irish Catholics, the Old English, and New English. Prof. Ohlmeyer closed her talk by examining the impact on Ireland of the European global empires in the Atlantic and Eastern worlds. The political, social, and economic effects on Ireland were both large and small. For instance, the audience was much amused to hear of Bailey, an inhabitant of Hacketstown, Co. Carlow, who irately complained to the authorities of the loss of his spices and who suspected that the local insurgents who had stole his cloves, nutmeg, and cinnamon were using them to flavour their morning droughts!

The launch of the Centre for Early Modern Studies, Limerick, concluded with a convivial gathering and looked forward to the next such gathering in Limerick for the Irish Renaissance Seminar in November.

The Centre for Early Modern Studies Limerick is pleased to announce that it will host the Irish Renaissance Seminar in November. This will be the first time that the IRS, held biannually in universities around the island of Ireland, will take place in Limerick. The CEMS Limerick, launched last week, is a joint initiative between scholars at UL and MICL.

This event is generously supported by the Faculty of Arts, Humanities and Social Sciences, UL, the School of Culture and Communication, UL, and by the Society for Renaissance Studies.

This post is available for three years to be an active member of the AHRC-funded research project ‘Performing Restoration Shakespeare’, assisting the Principal Investigator (Professor Richard Schoch, Queen’s University Belfast) and the International Co-Investigator (Professor Amanda Eubanks Winkler, Syracuse University, USA) in the planning, delivery and evaluation of research and impact activities.

University College Cork’s School of English is delighted to host a special guest lecture by Prof. Goran Stanivukovic (Saint Mary’s University, Canada) on the topic of “Shakespeare’s First Act: literature, theatre, and the earliest years”. The lecture takes place on Tuesday 18th October, 6pm, in the beautiful surroundings of the Council Room on the Quad, University College Cork. All are welcome to attend.
The lecture will focus on Shakespeare’s ‘earliest’ Elizabethan years in London and will explore the theatrical, literary, and artistic conditions that shaped the critical perceptions of Shakespeare’s early works. Prof. Stanivukovic will seek to challenge the view of ‘earliest Shakespeare’ as a ‘young’ writer struggling to find his voice and as bound by rhetorical cliches, and will argue that Shakespeare produced some of the most avant-garde drama and innovative poetry of the late 1590s at just this ‘earliest’ stage of his creative life. Prof. Stanivukovic will further question how we think about what ‘young’, or ‘early’, and what these mean in our modern critical assessment of a literary career. The lecture forms part of the British Council’s “Shakespeare Lives” programme and is one of a series of events held in UCC to celebrate Shakespeare 400 this year.

Prof. Stanivukovic is Professor of English at Saint Mary’s University, Halifax, Canada. He is a distinguished scholar of English Renaissance literature and Cultural Studies, with research interests in Shakespeare and drama of his contemporaries, prose romance, queer theory, masculinity, neo-classicism of the Renaissance, and the Renaissance Mediterranean. He has edited Remapping the Mediterranean World in Early Modern English Writings (Palgrave, 2007), Ovid and the Renaissance Body (University of Toronto Press, 2001), and with Constance C. Relihan, Prose Fiction and Early Modern Sexualities in England, 1570-1640 (Palgrave, 2003). His most recent monograph is Knights in Arms: Prose Romance, Masculinity, and Eastern Mediterranean Trade (University of Toronto Press, 2015). 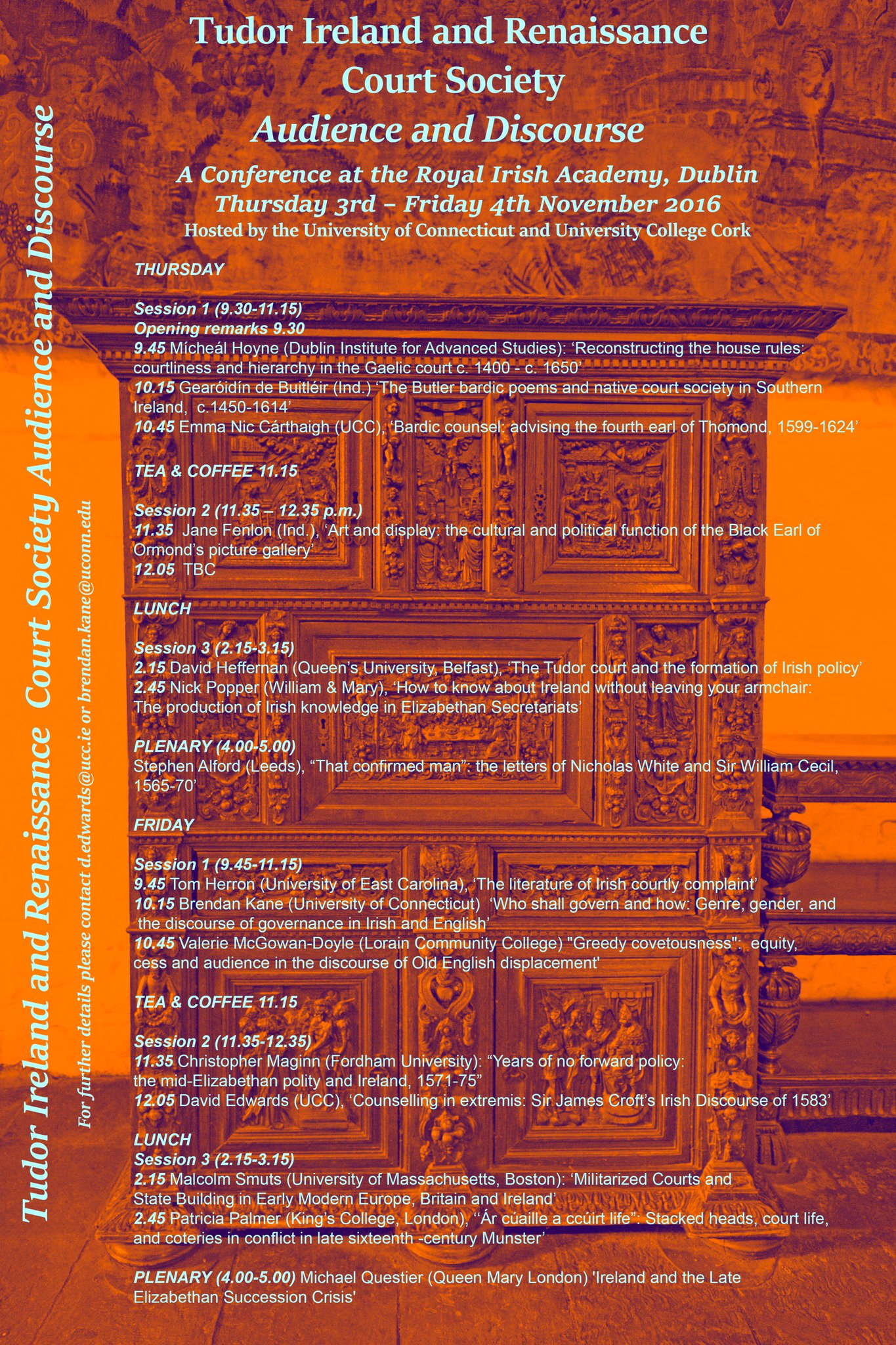 This conference, co-organized with University College Cork, augments the current upsurge in Renaissance Irish scholarship by merging it with new scholarship on the Tudor court and on public discourse. In the early modern period, the court was the site at which theories of politics met policy and action. Papers will explore the theory and practice of public discourse (challenges to, as well as possibilities for) in the historical perspective of Irish-English relations in an age of imperial expansion, colonialism and religious contestation and, in so doing, reflect on some root problems facing meaningful exchange in the “modern” public square.

‘The magic of Shakespeare’, Sir Jonathan Bate, with a response from Prof. Jane Ohlmeyer MRIA

The ‘Shakespeare lives through Kenneth Branagh on stage and screen’ exhibition will be on view in the Royal Irish Academy from 27 October until the beginning of December 2016.

The Centre for Early Modern Studies, Limerick, will be formally launched with an inaugural lecture and reception on Thursday 13th October 2016, at 5:15 pm, in the Glucksman Library, University of Limerick.

The inaugural lecture will be delivered by Professor Jane Ohlmeyer, Erasmus Smith’s Chair of Modern History, Trinity College Dublin who will speak on ‘Ireland in the Early Modern World’.

The Centre for Early Modern Studies, Limerick brings together scholars from the University of Limerick and Mary Immaculate College to further the study of the early modern world. The Centre stimulates interdisciplinary engagement and seeks to enhance the environment for intellectual exchange between its members. The Centre also promotes postgraduate studies and postdoctoral research. The Centre will draw on the wealth of material in the Bolton Library, now housed in the Glucksman Library, UL, and other collections, to promote early modern studies.

To register to attend, and for social media information, please see below.

Shakespeare in Ireland
Blog at WordPress.com.