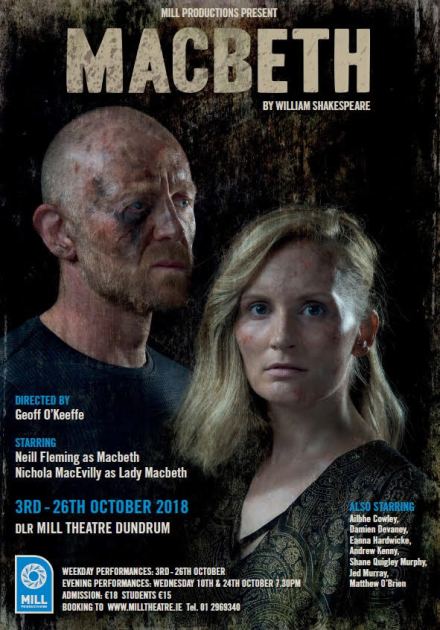 This was an engaging and fast-paced production, notable particularly for its rendering of the Witches, intriguing choices of doubling, tripling, and even quadrupling of roles, as well as an imaginatively conceived yet also very functional stage set. Because the play opens with the three Witches on stage, how a particular director chooses to portray this trio helps set the tone of the rest of the production. O’Keefe’s Witches were dressed in loose black garbs and hooded capes, designed to enable the actors to see but to prevent others from seeing their faces. The effect of these costumes (designed by Olga Criado Monleon) was quite eerie, especially as it gradually became clear to us in the audience, from the changing voices and the varying statures of the black-clad figures, that the roles of the witches in different scenes were being rotated among different actors. A look in the programme indeed reveals that five of the nine cast members play a witch at some point: Shane Quigley Murphy is both a Witch and Lennox; Andrew Kenny, Matthew O’Brien, and Ailbhe Cowley are triple-cast as Witch/Banquo/Doctor, Witch/Malcolm/Murderer, and Witch/Ross/Gentlewoman respectively; and Eanna Hardwicke gets to be Witch/Captain/Fleance/Young Siward. I suspect that the bundling of parts was to some extent prompted by budgetary constraints and/or availability of actors. But the unusual implementation of this bundling in regards to the Witches presents these figures as ubiquitous forces that not only shape the play’s events but that also somehow emanate from the world of the play’s human protagonists rather than from a separate supernatural realm.

It is worth noting that the production avoided the more common double-casting of Lady Macbeth with one of the Witches—likely because it would have implied the kind of too specific pre-emptive power dynamic between the human and the supernatural worlds this production sought to steer clear of. The Witches appeared as silent characters in a number of scenes where Shakespeare’s playscript does not call for their presence. They hovered in the background or foreground, watching the others’ actions or enacting inscrutable ceremonies around the cauldron (which stood at the front of the stage for the whole duration of the performance) and over a miniature replica of a semi-derelict medieval castle hall (or perhaps the nave of a church?) (which was located near the right-hand stage exit). As they did so, they periodically emerged out of dark corners of the set only to blend back into them. This underscored the witches’ omnipresence in a very physical way, by literally keeping at least one of them on stage for the majority of the show. A Witch thus watches as Duncan receives Macbeth to give him the good news of his newly gained title; a different Witch listens as Lady Macbeth reads out the fateful letter from her husband and then observes from the background the meeting between the Macbeths. The resulting integration of the Witches into virtually every moment of the play, whether through the overlapping in the casting of the majority of the roles or their insertions into most scenes as silent figures, ironically makes it very difficult to hypothesize about their roles in the play’s moral universe. They can be seen as representing everything, anything, and nothing at the same time—similar to how the dark void of the colour black results from absorbing all frequencies of light.

The remaining double and triple casting choices would seem to confirm this production’s refusal to locate the source of evil in the play somewhere in the triangle of usual suspects constituted by Macbeth, Lady Macbeth, and the Witches. Jed Murray plays both MacDuff and one of the Murderers while Damien Devaney plays Duncan, Porter, and Seyton. Only the roles of Macbeth (Neill Fleming) and his wife (Nichola Macevilly) are spared from this production’s love affair with doubling and trebling of roles, which ultimately emphasises the couple’s isolation and self-consuming despair. The set, designed by Gerard Bourke, creatively utilised the whole available space both vertically and horizontally as it included tree trunks, rocks, and caverns that the actors could variously position themselves on, in, or under. The set also featured a human skeleton and a partially burnt cadaver ominously suspended above the stage and periodically lit (lighting design by Kris Mooney) so as to cast shadows on the actors and actions below. I was a little disappointed by the elimination of many of the passages from the so-called Hecate scenes, especially since the witches and their ever-present cauldron otherwise play such a central role in this production. Another slight disappointment was the beheading of Macbeth’s corpse at the very end of the production, which prompted confused laughter from a portion of the audience as the special effect looked rather cheap and came across as almost comical, which did not appear to be the production’s intention.

This production opens with pulsating music, flashes of light, and three gyrating figures moving under the sway of some mesmeric force, so that for a few startling moments you might be at a production of Macbeth rather than King Lear. These are not the weird sisters, however, but Goneril, Regan, and Cordelia who face away from the audience towards a large structure upstage while human actors transformed into wolves snarl and weave around them. Suddenly the stage lights are reversed, dazzling the audience, and the actors’ faces turn to the back of the auditorium: the King is entering.

The large structure ­– half set and half stage property – resembles part of a huge crown with three spikes each jutting in a separate direction, the whole piece off-centre and its balance slightly off-kilter. In the centre is a throne, empty at first, then occupied by Lear, and later hovered over, circled, and sat on by various other characters. This is clearly a disturbed kingdom where powerful forces have gone askew, where there is splintering rather than unity, and where a sense of preternatural menace hums beneath the institutions of state, family, and marriage. It is quickly understood, then, that the sisters’ dance is not an expression of communion but of compulsion and disharmony.

Mill Productions is the production wing of dlr Mill Theatre and this production of King Lear is part of their “education outreach”. When I attended on opening night last Wednesday, about half the audience were a school group who seemed engaged in the performance throughout. The production does a good job of communicating the plot and character relationships clearly without condescending to the viewer at any point, and of showing how the visual and aural language of theatre generate the play’s meaning as it is lifted off the page. A number of characters are played by the same actor, as they would have been in Shakespeare’s time, but this doubling was never confusing.

It was also made use of artistically in the case of the choice to double the parts of Cordelia and the Fool, played by Clodagh Mooney Duggan. There has been speculation since the nineteenth century about whether the roles – which are never simultaneously on stage – might originally have been doubled. This production seemed to encourage us to consider in parallel how Cordelia and the Fool relate to Lear, challenging but loving him, and the first half ends with the Fool in tears and alone taking off his coxcomb hat to reveal more clearly that this was also Cordelia’s face. Such a choice does pose certain obstacles, however, and perhaps hampered the development of both characters.

I enjoyed the cool malice of Sharon McCoy’s multifaceted Goneril who managed to be both fragile and terrible. Philip Judge succeeded in presenting a Lear who was clearly deeply flawed at the same time as sympathetic. When he laid his head in the Fool’s lap and implored “O let me not be mad, not mad”, his desperation and vulnerability were heartrending. So too was his later admission to Cordelia that “to deal plainly / I fear I am not in my perfect mind”, where the gentle cautiousness of the delivery alongside the situation’s absurdity made it truly moving. It was these moments of pathos for humanity as the trappings of civility are eroded, even as we recognise human culpability, that stayed with me after I left the theatre. 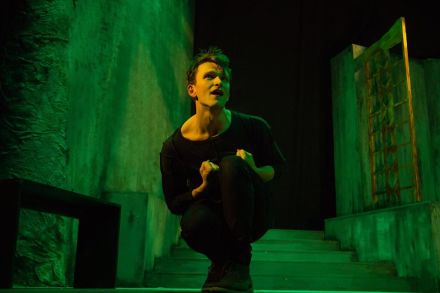 The Mill Theatre’s in-house company presents this energetic fast-paced Hamlet, which this academic year replaced King Lear as the Shakespeare fare on the Leaving Certificate in English. The energy of the production directed by Geoff O’Keeffe is driven in particular by the youthful Hamlet (Shane O’Regan), who infuses his performance of the demanding part with a rebellious teenage spirit. Regan’s performance is also highly physical. Unlike many other Hamlets, he brings in a surprisingly “athletic” take on the role, as he constantly moves, sometimes even runs and leaps, around the set. He also engages physically with the other characters, even where Shakespeare’s script does not explicitly require it.

What comes across as Hamlet’s aggressive rapport towards many of the other protagonists is, however, offset by his relationship with Horatio (Stephen O’Leary). The chemistry between the two characters, which suggests a deep and intimate (though not overtly sexual) bond, seems to function as a pillar supporting much of the production’s tragic heft. This Hamlet appears to trust Horatio fully and that trust is reciprocated with unrelenting loyalty even as Hamlet’s psyche starts to deteriorate under the extreme circumstances.

The tragic force generated by this relationship contrasts sharply with the comedic Polonius (Damien Devaney), who in this production comes across as a thoroughly clownish figure. He integrates both verbal and physical humor into his performance, which readily registers both with the other characters and with the actual audience. For instance, his repeated appearances on stage prompt ever-increasing levels of annoyance in Claudius (Neill Flemming). Polonius’s presence on stage indeed becomes something akin to a running joke, eventually eliciting laughter almost automatically by virtue of promise of further amusement. Even his murder is executed in a farcical spirit with other characters and the audience almost breathing a sigh of relief as he is dispatched.

Polonius’s death is nonetheless deeply mourned by Ophelia (Clara Harte), whose descent into mental instability is clinched by it, after she has already suffered through abuse and dismissals at the hands of both her father and Hamlet. Yet even as she descends into the inevitable madness, she delivers her lines with a clarity paired with purposeful action: for example, the passage about flowers (often played as an indicator of her lack of sanity) is here delivered as a haunting lament for her absent father complemented by use of actual flowers. Gertrude (Claire O’Donovan) also brings into her character a sense of intricately developed psychology. Her scenes with Hamlet in the closet are disturbingly poignant as an unmistakable Oedipal dynamic unfolds between the mother and son.

The austerity of Gerard Bourke’s set contrasts with the colorful characters. The minimalist concrete backdrop sometimes doubles as a makeshift screen for special digital effects (by Declan Brennan) that are projected onto it. The whole play opens with Hamlet standing under a digital deluge of water, suggestive of the themes of cleansing and much needed renewal. The Ghost of Hamlet’s father haunts these bare grey surfaces in his blue digitally-projected form and it is interesting to note that he is played by the same actor as Claudius. This of course opens the production up to many fascinating interpretations for both general audiences and secondary students studying the play formally this year!

Mill Productions will be staging Romeo and Juliet at the Mill Theatre, Dundrum in February and March 2017.