The Chester Beatty Library’s current exhibition is “a curator’s choice show” of rarely displayed items from the incredible collection of books and artworks.

For those interested in the early modern period, this includes a 1576 travel book on the world’s islands with a chapter on Ireland, which sounds particularly intriguing.

The exhibition runs until 1 February 2015. The Chester Beatty Library is located in Dublin Castle.

Timon of Athens is a thankless play, on so many levels. Unfamiliar to modern audiences, abrasive in tone, and disjointed to the point of incoherence, Shakespeare and Middleton’s play seems to push at the limits of what constitutes entertainment, like Timon’s last feast of ‘smoke and lukewarm water’ (3.6.89). The more accomplished the central actor is the less the audience will mourn his passing, while the supporting cast’s chief quality is ingratitude. For all this, AC productions give life to a play that has much to say to modern Irish audiences.

Considering Patrick Lonergan finds evidence of only 6 previous productions in the entirety of Irish theatre history, it seems fair to ask why this play, why now? We need only listen to Timon’s complaint to get an answer:

How goes the world, that I am thus encountered,/ With clamorous demands of broken bonds,/ And the detention of long-since-due debts? (2.2.38)

The play gives eloquent expression to financial instability, resonating with an audience who have experienced the good times giving way to withering debt. Some of Timon’s speeches verge on the incendiary, when he urges the bankrupt to withhold payment: ‘Large-handed robbers your grave masters are, and pill by law’ (4.1.11). Considering the continued secrecy surrounding the Irish government’s decision to bail out the banks, it remains an open question whether this counts as lawful robbery.

The staging in this production is at times reminiscent of the National theatre’s 2012 production with Simon Russell Beale: the first half is dominated by a long banqueting table, while poverty hovers on the fringes in the form of Alex Cusack’s homeless Apemantus. Later, the set resembles a dumping ground more than a forest, backed with a wire fence threaded through with green string – cleverly echoing the downward graph of the programme’s cover, an infographic of decline made from detritus. 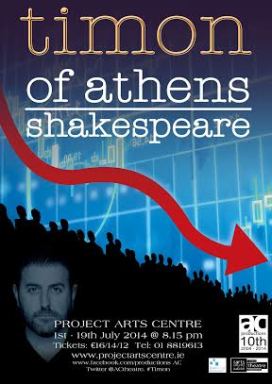 The regendering of characters including Apemantus, Lucius and Flavius worked well to update the gender imbalance (the original gives only two parts to women, both mistresses). The most drastic was the recasting of the poet and painter as women in hotpants and leopard print, who doubled very effectively with Alcibiades’ mistresses, lending an air of desperation to their encounter with Timon in the woods begging for gold. Doubling was well thought out overall, as the small cast of nine made a virtue of necessity. Lucius, Lucullus and Sempronius donned hats and leather jackets to become Timon’s bailiffs, demanding more money under a different guise. Having them return as senators in the final scene raised questions as to whether any of Timon’s enemies would be punished, even under Alcibiades.

With a running time of just under two hours with intermission, the text was cleverly edited to focus on the central characters, dispensing with extraneous flatterers and servants. The relationship between Timon and Flavius emerged more clearly as a result, and Eilis O’Donnell’s care for her master was evident from the outset. When sent to Lucullus for money, who appeared in a silk kimono open at the neck, her vulnerability was palpable as he told her how ‘I have observed thee always for a towardly prompt spirit’ (3.1.34).

Timon of Athens is a play that relies heavily on its eponymous lead. Having seen Paul Kealyn play Falstaff in AC’s Merry Wives of Windsor in 2011, I knew his comic acting could hold the audience’s attention. His Timon felt like a natural progression, as he moved from the vibrant host of the first act to an increasingly unstable stage presence, before descending to digging in the dirt as Misanthropos. His clarity in the longer speeches was notable, which did much to carry the audience through the play’s vicissitudes.

The language of the play made me think about the extent to which ingratitude is an abiding concern of Shakespeare’s oeuvre more generally; Coriolanus, Macbeth and King Lear all spring to mind. While the production was a little rough around the edges at times, the company are to be commended for expanding the usual Shakespearean fare on offer in Dublin, and tackling one of his most obscure, and frankly obtuse works. They succeeded in making the play relatable to modern audiences, whether through deft editing of the text or contemporary touches, like the group ‘selfie’ at the feast speaking to our culture of instant gratification. As for closure, Timon of Athens offers no neat resolutions; then again, neither does recession.

The programme for this year’s Dublin Theatre Festival has just been announced and there is the very exciting news that it will open with a performance of Hamlet by the famous Berlin theatre, the Schaubühne.

This sounds like it will be a thrilling, incandescent, and raw production of the familiar play, and ticket stock seems to be depleting already so move fast if you’d like to catch it.

Read more about it and book tickets on the Dublin Theatre Festival website. 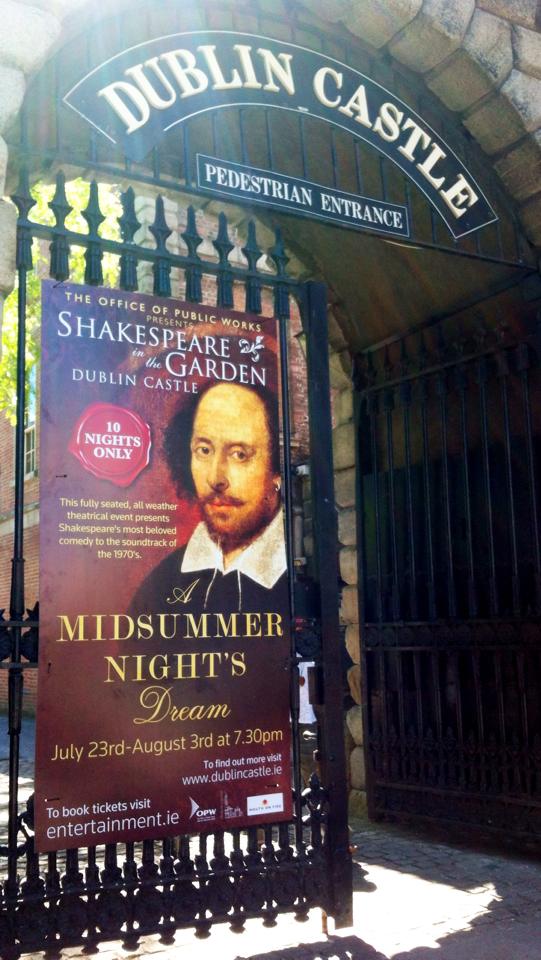 Mouth on Fire are back with a fun looking production of A Midsummer Night’s Dream, running for ten nights only in the grounds of Dublin Castle (weather permitting).

Tickets can be bought for the nice price of €6 here.

Then This Theatre Company presents a semi-staged reading of William Shakespeare’s Measure for Measure.

Vienna has become a hotbed of vice. In order to better understand his people, Duke Vincentio appoints Angelo as his temporary deputy. Under Angelo’s totalitarian rule, Vienna becomes choked with a culture of anxiety and shame. When a young man named Claudio is condemned to death for premarital sex, he begs his sister, the would-be nun Isabella, to plead with Angelo for his life. Overcome by her beauty, Angelo agrees to spare her brother’s life…if Isabella will sleep with him.

Measure for Measure combines humor with pathos, as a virtuous heroine tries to save her brother and her soul from the lewd desires of a hypocritical villain—with a supporting cast of cheerily debauched characters. One of Shakespeare’s “problem” comedies, Measure for Measure looks at the rewards of virtue and the punishments of vice. 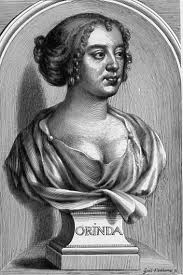 Marsh’s Library in Dublin was the perfect setting for a conference organised by Dr Marie-Louise Coolahan and Dr Gillian Wright to mark the death of Katherine Philips three hundred and fifty years ago. Over the three days, attendees listened to a wonderful range of papers that were diverse but also usefully interconnected, offering new and exciting perspectives on Philips and generating potentially fruitful discussions on her writing. Topics included the publishing history of Philips’s work and today’s editorial concerns, the literary contexts in which Philips wrote, the source materials and implications of her role as a translator, the complex and often competing dialectics of religion, memory, and friendship in her poetry, the circulation of her manuscripts, the afterlives of her printed texts, and the importance of Ireland as an enabling site, inspiring and building her reputation as a writer.

In the first plenary session, Linzi Simpson provided an enthralling account of how the seventeenth-century theatre, Smock Alley, was accidently discovered as part of an archaeological excavation; photographs and maps of the original walls along with images of various artefacts including oyster shells, wig rollers, and ceramic shards allowed the conference audience to re-imagine what it meant to experience a trip to the theatre in Philips’s time. Professor Sarah Prescott, in her plenary paper, argued that place and more particularly Wales played a very significant part in allowing Philips a pastoral haven from which to develop her writing and accelerate her literary output.

The conference concluded with a presentation from Professor Elizabeth Hageman that was generous in its scope and rich in scholarly detail. Crisscrossing the globe from Haddon Hall in Derbyshire to a library in Japan, Professor Hageman shared her insights and observations on the various editions of Katherine Philips’s books of plays and poems, pointing out and interpreting the significance of annotations, accounting for deviations in the title pages and frontispieces, and tracking the evolving patterns of owner histories across the centuries. In so doing, conference attendees were provided with a thoroughly researched body of evidence to substantiate Katherine Philips’s universal and timeless appeal as a writer for all kinds of readers. All of the papers were thought-provoking, whilst also confirming that much work remains to be done on the subject of Katherine Philips and her intellectually absorbing and challenging opus. 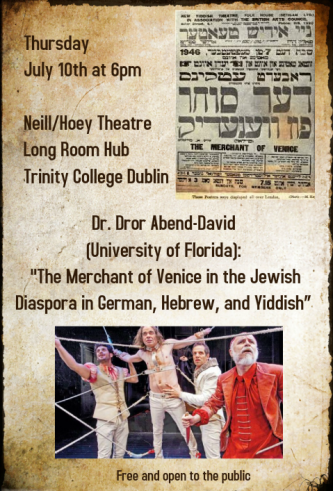 The latest issue of Óenach Reviews, from the Forum for Medieval and Renaissance Studies in Ireland (FMRSI), is out now.

It contains reviews of Ethical Perspectives on Animals in the Renaissance and Early Modern Period and Castration and Culture in the Middle Ages among many more.