The Granary Theatre Cork is delighted to present Aphra Behn’s uproarious comedy The Rover. Behn was the first female professional playwright and this Restoration play is one of her most famous and popular works. Charting the adventures of a group of young Englishmen visiting Naples during carnival time, The Rover packs in plenty of fun with disguises, misunderstandings, and bawdy jokes to make a hilarious and incident-packed comedy. The Rover will be performed by Drama and Theatre Studies students from University College Cork and it runs from Wednesday 4th to Saturday 7th November at 8pm. For more information and to reserve tickets see The Rover on The Granary Theatre website.

With King Lear currently on the English Leaving Certificate, this rendition of the Shakespeare classic primarily has the secondary school audience in mind but won’t disappoint adult Shakespeare enthusiasts and theatre-lovers.

One of the greater accomplishments of the production is its ability to compress the original Renaissance play-text (which often runs up to four hours in performance) into a briskly-paced show that lasts just over two hours without sacrificing any of the characters, major plot and thematic points or well-known passages.

The cast of Mill Theatre’s inhouse company features a slightly younger and more vibrant Lear (Lenny Hayden) than has been usual in other contemporary productions of the play. His daughters are fully encapsulated in carefully constructed and individualized theatrical identities: Goneril’s (Eilish Rafferty) cruelty is more tempered as well as justifiably opportunistic while Regan’s (Sarah Joyce) genuinely sadistic persona with its nefarious motivations comes across as a real driving force behind the tragedy. From the other characters, the Fool (Shane O’Regan) stands out as equally lewd and prophetic, bringing out the meaning buried in his comedic role through both a physically and verbally masterful interpretation of the character.

Gerard Bourke provides an abstract minimalistic set, consisting of three slender triangular pyramids set on a platform and surrounded by a metal railing topped with multiple spheres. The whole construction is evocative of the central concerns of the play: the royal crown, the sisterly trio, and the influence of celestial bodies on human fates. This seemingly simple set is nonetheless fully utilized as the actors integrate it into their performances, making it alternatively into a prop, a backdrop, and even a gymnastic apparatus. The artistic merit of the production is borne out both by successive full houses and performances added to the month-long run due to popular demand.

A Series of talks and explorations on Shakespeare in Ballyfermot, Cabra and Rathmines libraries during October and November.

Dublin City Public Libraries are delighted to welcome The Then This Theatre Company  as they host series of information and exploratory talks in the libraries. The company consists of directors Aoife Spillane Hinks, Maeve Fitzgerald and Tanya Dean and each will take a lead  on each topic – Shakespeare on Love, Acting Shakespeare and Shakespeare and Ireland. The talks are free but booking is highly recommended. Details about the events, the locations, dates and times are as follows –

Shakespeare on Love
Aoife Spillane-Hinks explores how love can delight, humiliate, enlighten and exalt us in the work of William Shakespeare. With the help of extracts from Measure for Measure, explore how Shakespeare brings his characters to life, and what happens when they fall in love. It is a celebration of Shakespeare’s greatest achievement – showing us, even today, what it means to be human. Participants will learn how to unlock the Bard’s delicious rhythms and language in this bite-sized introduction.

Acting Shakespeare
Maeve Fitzgerald will give an introduction on the different methods actors use to approach a Shakespearian role and discuss some of the challenges and opportunities that the language presents. In this day and age of textspeak and emojis how can we tap into the seemingly complex verse and prose of the bard, discover its accessibility and use it to build a character?

Shakespeare and Ireland
Tanya Dean leads this lecture about the relationship between the bard and Ireland; how Ireland and the Irish are depicted in his works, a select history of key productions of Shakespeare in Irish theatre history, and why we return again and again to his works on the stage and in Irish education.

The Cork Shakespearean Company is delighted to present King Lear from the 28th-31st of October in the Unitarian Church on Princes Street, Cork. Widely regarded as the jewel in Shakespeare’s literary treasure chest, this seminal classic has been given new life in this innovative and powerful production. Performed in the round in the Unitarian Church by an all star Cork cast, led by Michael Grennell as King Lear, and under the new directorship of Declan Wolfe and Sinead Dunphy, this promises to be an unmissable production.

Tickets available on the door but seating is limited so advance booking is advised to avoid disappointment. (Tickets available online through the Everyman theatre.) For more on the Company and their productions see the Cork Shakespearean Company Facebook page.

The Limerick Early Modern Studies Forum held its first ever public event on the 25th September 2015 with a symposium on ‘Collaborative Research in Early Modern Studies’. The Limerick Early Modern Studies Forum is a body established to support the research activities of early modernists across the disciplines at the University of Limerick and Mary Immaculate College, Limerick. The Forum was founded in February 2015, following the award of funding from the Irish Research Council New Foundations Scheme. This funding will facilitate the various start-up activities of the research cluster which include the recent symposium and a two-day conference on the theme of ‘Moments of Becoming: Transitions and Transformations in Early Modern Europe’ which will take on 20-21 November 2015 at the University of Limerick (the conference programme and registration forms are available here: https://emslimerick.wordpress.com).

The recent symposium explored different aspects of research collaboration in early modern studies. In a paper on ‘Research Collaboration and Early Modern Studies’, Prof. Graeme Murdock (TCD) discussed his experiences of establishing early modern research centres at the universities of Birmingham and Trinity College Dublin. In a paper entitled ‘In the Tavern, at the University, and Online: Collaborating on the Early Modern in Ireland’, Dr. Edel Semple (UCC) discussed the value and importance of informal, inter-institutional, and online fora as a means of stimulating and supporting research collaboration with particular reference to her experiences of the Early Modern Tavern Society, the Irish Renaissance Seminar, and the Shakespeare in Ireland blog. In his presentation on ‘Herding Cats and Cataloging Early-Modern Spanish Print. Some Reflections on managing Iberian Books’, Dr. Sandy Wilkinson (UCD) discussed his experiences as the Principal Investigator of the long-running Iberian Books project which is funded by the Mellon Foundation. The concluding ‘round-table’ discussion provided an opportunity to explore how the many insights offered over the course of the symposium might inform the future development of the Limerick Early Modern Studies Forum.

Several Irish cinemas are screening the much talked about production of Hamlet currently running at the Barbican theatre, London.

From the Lighthouse cinema, Smithfield, Dublin:

Academy Award nominee Benedict Cumberbatch (Sherlock, The Imitation Game) takes on the title role of Shakespeare’s great tragedy. As a country arms itself for war, a family tears itself apart. Forced to avenge his father’s death but paralysed by the task ahead, Hamlet rages against the impossibility of his predicament, threatening both his sanity and the security of the state. Directed by Lyndsey Turner and produced by Sonia Friedman Productions, National Theatre Live will broadcast this eagerly awaited production live to Light House Cinema from the Barbican Centre in London.

This production will also screen at Cork Opera House: 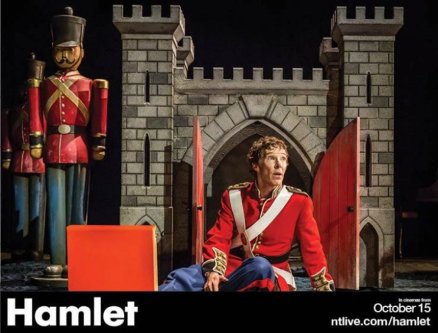